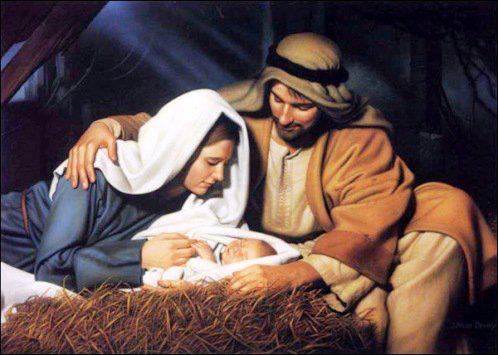 There was once a man who didn’t believe in God and he didn’t hesitate to let others know that he felt religion and religious holidays, like Christmas, were a lot of childish fairy tales. He said that religion was a crutch for people who were too stupid to figure things out for themselves or too fearful to live by their own strength. If God were real He sure wouldn’t do some of the dumb things people said He did.

His wife, however, did believe in God and was always quick to say that she was born again. She raised their children to also have faith in God despite his disparaging comments.

One snowy Christmas Eve, his wife was taking their children to a Christmas Eve service in the farm community in which they lived. She asked him, as always to come, but he refused. “What a lot of nonsense!” he said. “Why would God lower Himself to come to Earth as a man? That’s ridiculous!” So she and the children left, and he stayed home.

While they were gone, the wind and snow grew stronger until it was a blizzard. As the man looked out the window, all he saw was a blinding snowstorm. He sat down to relax before the fire. He knew his wife would not venture back on the road till the storm abated and he knew there were good snow tires on their SUV. So, nothing to do except enjoy the peaceful evening.

Then he heard a loud thump. Something had hit the window. Then another thump. He looked out, but couldn’t see more than a few feet. When the snow let up a little, he ventured outside to see what could have been beating on his window.

In the field near his house he saw a flock of wild geese. Apparently they had been flying south for the winter when they got caught in the snowstorm and couldn’t go on. They were lost and stranded by this storm. They just flapped their wings and flew around the field in low circles, blindly and aimlessly. A couple of them had flown into his window, it seemed. The man felt sorry for the geese and wanted to help them. The barn would be a great place for them to stay, he thought. It’s warm and safe; surely they could spend the night and wait out the storm.

So he walked over to the barn and opened the doors wide, then watched and waited, hoping they would notice the open barn and go inside. But the geese just fluttered around aimlessly and didn’t seem to notice the barn or realize what it could mean for them. The man tried to get their attention, but that just seemed to scare them and they moved further away.

He went into the house and came with some bread, broke it up, and made a bread crumb trail leading to the barn. They still didn’t catch on. Now he was getting frustrated. He got behind them and tried to shoo them toward the barn, but they only got more scared and scattered in every direction except toward the barn. Nothing he did could get them to go into the barn where they would be warm and safe.

“Why don’t they follow me?!” he exclaimed. “Can’t they see this is the only place where they can survive the storm?” He thought for a moment and realized that they just wouldn’t follow a human. “If only I were a goose, then I could lead them,” he said out loud. Then he had an idea.

He went into barn, got one of his own geese, and carried it in his arms as he circled around behind the flock of wild geese. He then released it.

His goose flew through the flock and straight into the barn–and one by one the other geese followed it to safety. He stood silently for a moment as the words he had spoken a few minutes earlier replayed in his mind: “If only I were a goose, then I could save them!”

Then he thought about what he had said to his wife earlier. “Why would God want to be like us? That’s ridiculous!” Suddenly it all made sense. That is what God had done. We were like the geese, blind, lost, perishing. God had His Son become like us so He could show us the way and save us. That was the meaning of Christmas, he realized.

As the winds and blinding snow died down, his soul became quiet and pondered this wonderful thought. Suddenly he understood what Christmas was all about, why Christ had come. Years of doubt and disbelief vanished like the passing storm. He fell to his knees in the snow, and prayed his first prayer: “Thank You, God, for coming in human form to get me out of the storm!”

5 thoughts on “Why Christmas is Important”